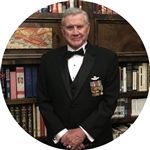 Class of 1959
Military/Aviation
USAF fighter pilot, commercial pilot
When it comes to “aiming high,” few alumni have taken it more to heart than Hank Hoffman, ’59, who soared to the outer edges of Earth’s atmosphere as a test pilot for the United States Air Force and racked up over 18,000 hours of flight in the military, as an instructor and as a commercial pilot.

In fact, Hoffman spent his entire career in the air, entering what was then the newly opened United States Air Force Academy in Colorado Springs after graduation from Cranbrook. “The facility had opened its doors just ten months earlier and all upper classmen came from a temporary venue at Lowry Air Force Base near Denver,” Hoffman recalls. “My class doubled the size of the cadet wing.”

After the Academy, Hoffman entered pilot training, the first step in achieving his ambition of becoming an astronaut – even before the word was coined. As a teenager, he had read a lot of science fiction and dreamed of space travel.

As a young man, Hoffman worked hard and was recognized as gifted. While attending school in Detroit, Hoffman says his sixth-grade teacher visited his mother and told her that her son had talent and needed to go to Cranbrook. “He said they were giving scholarships and I got one,” Hoffman says. ”I was so glad that my teacher did that. He was an unsung hero for me. And I’m so glad that my mother agreed, too.”

Cranbrook, says Hoffman, “gave me an appreciation of art like I would never have had. It opened my eyes to beauty. And it did wonderful things for my English skills, which helped me a lot through life.” He credits much of that to legendary English teacher Carl Wonnberger.

He calls former Cranbrook instructor Ben Snyder another hero of his. Later, when Hoffman flew in combat, he found himself in the same unit that Snyder had flown in during World War II. That was just the continuation of a lifelong friendship. “I ran track for him, and our team set a school record for the mile relay,” Hoffman recalls.

After graduation from the Air Force Academy, Hoffman entered pilot school and learned how to fly. “I just sort of fell into my choices and ran with them,” Hoffman says. “It took me a little while to fall in love with flying, but I ended up being pretty good if I do say so myself.” In looking back at all of his hours spent in the cockpit, he says, “It just means I worked hard at it.”

Hoffman flew a total of 377 combat missions in Vietnam, piloting B-52 bombers and A-37s, which were light ground-attack aircraft developed and introduced during the war. “It was a rewarding mission when you could hear the ground troops thanking you over the radio for saving their bacon,” says Hoffman.

Having served in Vietnam and flying so many missions, “people think I must be pro-war,” Hoffman says. “Let me tell you, war is something no one who has actually been in combat is fond of. It is an incredible waste of manpower, resources and money and should be avoided whenever possible. (But), in my humble opinion, sometimes you have to go to war against evil. Eighteen of my Academy classmates never returned from Vietnam, but we believed the South Vietnamese needed our help.”

After Vietnam, Hoffman was cleared to go to graduate school at Arizona State University where he earned a degree in industrial engineering and then joined the United States Test Pilot School in the Mojave Desert north of Los Angeles.

“Test pilot school was my route to the stars,” Hoffman says. “Except I was never selected for astronaut training. It’s really a little political at that high level.” He did, however, get to take an F-104 to 80,000 feet “were you can see the curvature of the Earth, a bright blue band of atmosphere, and the sky is black in the daytime,” he says. “It was spectacular!”
Hoffman found test flying to be “vastly interesting,” he says. “I had leveled off at a great place and got to fly lots of different and fun things.” That included bombers, fighters, tankers, transports, gliders, helicopters, airliners and even the Goodyear blimp over 11 years as a test pilot.

Later, Hoffman flew for as a commercial airline pilot. Today, he volunteers at the Air Force Academy in Colorado, serving as a docent and working with the next generation of leaders and pilots. In discussing command, he reminds future leaders that they must be an example. “You have to stand up for things that are right,” he says. “You can’t just give it lip service. You have to live it.” Of command, he says, “you have to take care of your troops. If they’re motivated, you can get them to do stuff they never knew they could do.”
Hoffman piloted his last flight in 2013 as part of the Academy’s first septuagenarian aerial acrobatics team at his class’s 50th reunion. “I had more fun, and perhaps generated more adrenalin than any Cranbrook grad ever in my 18,000 hours of flying,” says the man who likely is Cranbrook’s only test pilot alumnus. “Aiming high was a way of life then, and few have been higher.”

Looking back on his career, Hoffman says, “This retired colonel thinks he was most alive when so close to death. At the end of the day I used to get out of my bird and head for the bar, saying ‘cheated Death again.’ What man would trade that for a law degree and membership at the country club?”
Back