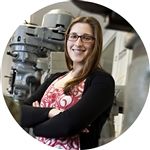 For someone with asthma, few feelings are worse than that desperate loss of air that signals an attack. In the United States, one in ten people suffer from asthma with many struggling to manage this chronic but treatable condition.

Now that effort is about to become a lot easier, thanks to Abby Cohen, ’09, a biomedical engineer whose firm, Sparo Labs, has designed a new technology that measures lung function and provides people with an easy way to manage and address their asthma.

Cohen co-founded Sparo Labs while still a student at Washington University in St. Louis and remains its co-CEO. The firm’s device, called Wing, is a deceptively simple looking spirometer that uses microphone technology to sense and measure lung function via a smart phone app. Earlier this year, the device earned approval from the Federal Drug Administration for over-the-counter use.

Wing will allow people to make use of an already existing plan of care called the Asthma Action Plan. When people check their lung function by using Wing, they will see a reading that falls into one of three categories – green, yellow or red. Green indicates good lung function. Yellow means an attack is impending and an inhaler is needed. Red indicates a lung function of less than 50 percent, meaning rescue medication must be taken immediately and medical assistance sought.

The idea for Wing arose out of Cohen’s time with Engineers Without Borders, a volunteer group that to solve problems via engineering. “I was shadowing an allergist who let me talk with his patients,” Cohen says. “One man I spoke with was audibly wheezing and he said that’s what it was like for him every day. Before we dug into the research, I didn’t realize how big a problem asthma was. It’s chronic, it affects millions and the hospitalizations for it are nearly all preventable.”

Much of the difficulty lies in the fact that many people who suffer from asthma may not know or understand their care plans. They may, for example, get a peak flow meter from their physician but not understand the readings. With Wing, Cohen and her team sought to create something simple and affordable that could help people care for themselves safely and effectively. “This makes it easier for patients to know what to do,” Cohen says.

It is a technology that has earned interest from industry, potential users, the scientific community and even the White House. In August 2015, Sparo Labs was participated in the White House’s first-ever Demo Day, hosted by President Barack Obama. The event featured startups from across the country, showcasing innovations and inviting founders to share their individual success stories and encourage others to pursue, as the White House stated, “bold, game-changing ideas.”

Sparo Lab will begin selling Wing directly to customers from its website later this year while also working to introduce the device to health care professionals.

Cohen hopes that Sparo Labs can one day do even more for the millions who struggle with lung and respiratory conditions. “We want to be able to provide end-to-end solutions for respiratory diseases,” she says.

That will include working with physicians and healthcare providers. “How can you effectively leverage technology into the flow of typical medical care?” Abby says. “The data from our product can be so much more powerful if you can link it back to someone who can help you with your care.”

For Cohen, this ability to problem solve and look at the big picture grew during her years as a student at Cranbrook and then later in college. “I always really liked math and science but I didn’t necessarily know that engineering was the perfect combination of those two things until right before I went to college,” she says. Biomedical engineering provided her with a “great mixture of helping people and problem solving,” she adds.
Cohen remains focused and enthusiastic about Sparo Labs and all of the possibilities it holds. “I know when I wake up and go to work everyday, I’m excited,” she says. “There are hurdles but having patients excited about Wing and knowing it can change their lives is really motivating. Knowing it’s helping others is really a great feeling.”
Back