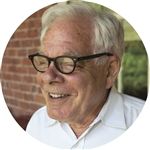 Class of 1959
Journalism
Cookbook author
Food editor, New York Times
After graduating from Harvard College summa cum laude in classics, and spending a year as a Fulbright Scholar at Wadham College, Oxford, Sokolov spent two years back at Harvard pursuing a doctorate in classics. In 1965 he passed his orals.
In 1965, Sokolov began work as foreign correspondent for Newsweek Magazine in its Paris bureau. In summer 1967, he returned to the U.S. with Newsweek as an arts writer.
In 1971, he became restaurant critic and food editor of the New York Times, where his pieces covered the decor, lore, and politics of New York restaurants as well as the productions of their kitchens. His reviews first noted the arrival of Sichuanese and Hunanese food in North America. He was the first writer in English to notice nouvelle cuisine in France.

In 1975 he left the Times to pursue a career as a freelance writer from his home in Brooklyn Heights. In 1981 became editor of Book Digest, then the founding editor of the Wall Street Journal's daily Leisure and Arts page, a post he held until 2002. He continues to write about food for national publications.

Sokolov has written several cookbooks, including The Cook's Canon: 101 Classic Recipes Everyone Should Know, which includes recipes from the world's cuisines that Sokolov terms as being necessary to "culinary literacy," as well as brief essays. Other works include The Saucier's Apprentice, a highly regarded cookbook on the hierarchy of French sauces, Why We Eat What We Eat: How the Encounter between the New World and the Old Changed the Way Everyone on the Planet Eats, and a biography of A. J. Liebling, Wayward Reporter .

His long-running column "A Matter of Taste," on the Americas' foodways for the American Museum of Natural History's Natural History injected some researched facts and logical deduction into the highly fanciful traditional histories of cooking and helped lead to the revival of interest in American regional specialties. Some of the columns have been collected as Fading Feast: A Compendium of Disappearing American Regional Foods.
Back