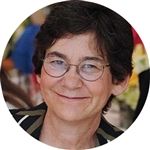 Before she became a journalist, Kolbert was a public interest attorney specializing in women's reproductive rights. From 1979-1988, she was a Staff Attorney with the Women's Law Project and Community Legal Services in Philadelphia. Kolbert served as the State Coordinating Counsel of the American Civil Liberty Union's Reproductive Freedom Project in New York City from 1988-1992. Between 1992 to 1997, she directed domestic litigation and public policy programs for the Center for Reproductive Law and Policy, where she was Co-Founder and Vice President.

In 1992, Kolbert argued before the United States Supreme Court in Planned Parenthood v. Casey, a case which challenged five abortion regulations in Pennsylvania. Kolbert was unsuccessful and four out of five regulations were upheld.

From 1998-2008, Kolbert oversaw a program on law and American life at the University of Pennsylvania's Annenberg Public Policy Center. She was the Executive Producer of Justice Talking, a radio program distributed by National Public Radio, and directed an educational website called JusticeLearning.org, which received a Webby Award in 2005.

Kolbert has been recognized by the National Law Journal as one of the "100 Most Influential Lawyers in America," and by the American Lawyer as one of 45 public-interest lawyers "whose vision and commitment are changing lives." In 2011, Kolbert received the Edith I. Spivack Award from the New York County Lawyers' Association's Women's Rights Committee.
Back