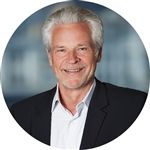 After graduation, Jeff went on to earn his B.A. in English and History at the University of North Carolina at Chapel Hill.

His previous work experience includes stints in both magazine publishing and digital media. Jeff began his career at Time Inc. in marketing and advertising sales and moved to Smithsonian magazine as Marketing Director in 1981. Three years later, Jeff became Publisher of The New Republic magazine in Washington, DC where he spent 11 years and also founded one of the earliest commercial Internet companies, Enews.com.

An early Internet pioneer, Jeff became COO of the B2B publishing company Mecklermedia in 1995 where he oversaw the magazine group (Internet World, Web Week, and Web Developer) as well as the company’s web sites. He joined D+P in 1997 to help spearhead the firm’s early forays into digital media and technology M&A.

He is currently a partner at Oaklins, DeSilva + Phillips, an investment banking company.
Back