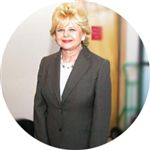 After graduating from Kingswood, Shelley Scarney Buchanan continued on to the University of Michigan, where she would graduate in 1958. After graduation, she joined Richard Nixon's staff when he was the U.S. Vice President in 1959, and later worked for him in the New York law firm of Nixon, Mudge, Rose, Guthrie, Alexander & Mitchell.

She was a White House receptionist throughout Nixon's presidency, which is where she met her husband, politician and presidential candidate Pat Buchanan.
Back