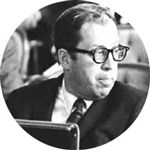 from the IEEE Computer Society:
Bemer is the inventor of the words "Cobol," and "CODASYL," six ASCII characters, and the concepts of registry and escape sequences in character codes. He also invented the term and defined the nature of the "software factory." At IBM he developed the first load-and-go system (PRINT I) and also was responsible for the implementation of the programming system FORTRANSIT, which provided a quick first compiler for the IBM 650 computer, and was the first programming language to run both decimal (IBM 650) and binary (IBM 704) computers. For the support of commercial programming Bemer developed PRINT I; in the late 1950s he developed XTRAN, a step towards Algol, and "Commercial Translator," which became a significant input to Cobol. His major Cobol innovations were the IDENTIFICATION and ENVIRONMENT divisions, and the PICTURE clause.

Bemer is probably best known for his contributions to ASCII (American Standard Code for Information Interchange). He was not the inventor of ASCII; a hard-working committee surveyed many candidates for a code for information interchange, but instead of selecting one, it generated a code that did not exist before it began its work. Bemer represented IBM in this work, even though IBM still favored EBCDIC. At the time the hardware permitted the use of only seven bits, and thus any alphabet was limited to 128 characters and symbols. While hardware circuitry used eight bits, one bit was used for distinct check-bit, or error-bit, purposes. The American Standards Committee X3.2 recognized the limit of 128 symbols as being a significant barrier to the general acceptance of the code, and thus sought a solution. Bemer proposed the concept of an "escape sequence" that would allow the information system to break out of one alphabet and enter another that would be identified by the 7-bit identifiers following the escape code 0011011. As of 1991, 150 such extra-ASCII alphabets have been defined and registered, including Greek, Cyrillic, Arabic, and Japanese.

The escape sequence is the basis of many technologies, such as cursor movement and color on video screens, laser printers, photo-composition, video games, and computer-generated movies.

Bemer's forceful articulation and demonstration of the simplicity of the "escape sequence" solution achieved acceptance of a US standard that rendered as nonstandard all existing computer designs, software systems, and telecommunications hardware, including the whole repertoire of IBM equipment that used EBCDIC (Extended Binary Coded Decimal Interchange Code). Remarkably, ASCII and its companion parallel codes have survived for almost 30 years, along with only a few programming languages such as Fortran and Cobol. Very few such basic technologies have managed to survive through so many generations of machines. Since personalized automobile license plates became available, Bemer's cars have carried the tags "ASCII," "ESC SEQ" "Cobol 1," and "Cobol 2."
Back