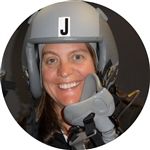 Class of 1984
Aerospace
Planetary scientist, Southwest Research Institute
"New Horizons" mission to Pluto
In 2006, Cranbrook Kingswood graduate Cathy Olkin stood near the shoreline in Cape Canaveral, Florida, and watched a spacecraft she helped design begin its ascent to Pluto. It was an experience Olkin doesn’t believe she would have been a part of if not for her early start at Cranbrook.

“At Cranbrook, I was in an environment where I was able to reach more and learn more,” Olkin says. “Being curious was a safe thing to be. It was accepted.”

Olkin is a pioneer, not only by being part of the “New Horizons” team sending the first spacecraft to Pluto, but also by preparing to fly into space herself.

The Southwest Research Institute (SwRI) in Boulder, Colo., where Olkin works as a planetary scientist, recently signed contracts with Virgin Galactic and XCOR Aerospace that will send Olkin and her colleagues into space upon a commercial spaceship within the next two years.

“We’ve been training and we have experiments ready to go,” says Olkin. As an astronomer, the space flight will allow her to intimately study planets and satellites of other planets along with high altitude clouds in the earth’s atmosphere. More importantly, it puts her at the forefront of how we will study space in the future. “We’re learning how to study astronomy from this new platform,” she says.

Olkin believes many of us will be able to fly into space in the coming years. To help advance the industry’s progress, she’ll wear biomedical gear on her flight to study the effects of zero gravity on her body. As she says, commercial space flights, “are going to open up space to grandmothers and young people.”

It’s a long way from Mrs. Lebow’s Algebra 2 class, but Olkin says she uses the lessons she learned there every day. She also gives back to her community by coaching a middle school robotics team and mentoring college students.

“I feel the seed for community service was planted at Cranbrook,” she says.
Back