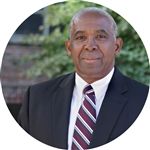 Darryl Taylor can easily sum up his experience at Cranbrook with four words: Skill, Knowledge, Character, and Citizenship. The same words that are etched in stone in front of the school’s Academic Building. “Those four words guided my life and career,” he says.

A “kid from the projects in Detroit,” Taylor arrived at Cranbrook in 1968, a student in the Horizons-Upward Bound program. After graduation, Taylor went on to get a degree in dentistry and then serve as a naval officer for 30 years.

Today, he serves as the director of Cranbrook’s Horizons-Upward Bound program, the very same program that gave him his start all those years ago.

“This nation, along with Cranbrook and Horizons-Upward Bound, gave me an opportunity to become more than I ever dreamt possible,” says Taylor. When he decided to enter the Navy after dental school, he was, “going back to those words from Cranbrook, in particular, ‘citizenship.’ I felt that I owed so much to my country.”

Taylor says Cranbrook taught him the principles that allowed him to succeed in the military. “In the Navy, we live by honor, courage, and commitment, the same focus I had at Cranbrook.”

Yet the word that resonated with him most was “character.” “I felt that regardless of the opportunities that had been given to me, people would always judge me by my character.”
After 30 years of military service and a current position that allows him to help close to 180 at-risk kids a year, his character is as well preserved as those words in front of the Academic Building.
Back