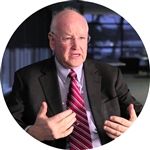 It may have been more than 60 years since James Maas first entered a Cranbrook classroom, but the social psychologist best known for his breakthrough sleep research can talk about each of his teachers as if he were there yesterday.

“Wallace Cripps tutored me for three hours every Saturday for the entire year of sixth grade,” says Maas. “And I’ll never forget the day in seventh grade when I got my report card and went running down the hill to the lower school to show Mr. Cripps that I got an A in math. He gave me confidence.”

“That one-on-one coaching, that patience, that zest for learning stuck with me,” he says. “The emphasis of not competing with one another but developing yourself,” is something Maas took with him to Cornell where he served as a professor for 48 years.

“I took the one-on-one teacher/student relationship to a major research university and it kind of exploded on me,” he says. His introductory psychology class started off with 250 students and within a few years, the class had an enrollment of nearly 2,000. “It had to be held in a concert hall,” he says. “I wound up teaching 65,000 students over my career which is the world’s record for live lecturing.”

“I went out to Stanford more than 40 years ago to make a film about the man who discovered that rapid eye movement was the key to capturing dreams,” he said. “And in one night of filming his work I decided that was what I was going to do for the rest of my life.”

Since then, he’s become one of the world’s foremost experts on the importance of sleep, authoring the best-selling book “Power Sleep” and several others. He’s made appearances on the TODAY Show, Oprah, CNN, The NBC Nightly News and many more programs urging Americans to get more sleep. Vogue magazine once called him “America’s Sleep Evangelist,” a term he first took offense to, but then realized, “that’s exactly what I am!”

He has also produced nine national television specials for PBS, produced films for the BBC and National Geographic Society as well as companies such as General Motors, Exxon and the United States Department of Transportation. Maas says his films have won awards in 44 major film festivals.

Today, he’s retired from Cornell, but still travels the world giving lectures and training companies and professional athletic teams about how to improve performance with more sleep. According to recent research from the Centers for Disease Control and Prevention, 40.6 million Americans, or 30 percent of the civilian workforce, don’t get enough rest. “We’re full of full of education classes about nutrition and exercise, but they don’t mean anything unless you get adequate sleep,” says Mass. Our “workaholic society” and changing economy cut into our sleep, as do recent inventions such as Facebook, which he calls a “real sleep thief.”

How does he do it all? He says, “That’s why I invented the term ‘power nap.’”
Back