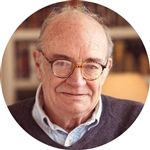 Class of 1953
Journalism
Pulitzer Prize finalist, National Book Award finalist, multiple O. Henry Award winner
Ward Just was a born storyteller. His father and grandfather were both newspaper publishers, so he was raised with a keen appreciation of the written word. However, his road to success followed a divergent path.

After graduating from Cranbrook and studying at Trinity College, he took a job at his father’s paper, the Waukegan News-Sun, in his Illinois hometown. Restless, he moved on to Newsweek and then the Washington Post, where his specialty became covering war. He covered conflicts in Cyprus and Santo Domingo, and in 1965 began a year-and-a-half stint in Vietnam at the height of the conflict.

“For me, the newspaper business was a way to try and learn how the world worked,” he said. But after his time in Vietnam, “I decided I didn’t need to know more about the world than I already knew.”

He took a leave of absence from the Post in 1969 and began work on a novel. Writing fiction had always been an interest of Just’s, even in high school.

“At Cranbrook I won a prize for short fiction,” says Just. “And that was the first real recognition I ever had for the work I felt I was destined to do.”

He finished his first novel in just a few months and never looked back. Since then he’s written 17 novels, four short stories, two nonfiction titles and a play. His novel An Unfinished Season was a finalist for the Pulitzer Prize for Fiction in 2005, Echo House was a finalist for the National Book Award in 1997, and his works have won him numerous other awards including O. Henry Awards (for both fiction and nonfiction), Chicago Tribune Heartland Awards for fiction and many others.

Just acknowledges that reporters today don’t often make the jump from journalism to literary fiction as much as they used to. Perhaps, “because the other definition of literary fiction is books that don’t sell very well,” he laughs.

He had always intended to leave journalism, but “kept at it longer than I should have,” he says, noting that the transition can often be difficult. “There’s a lot about journalism that you have to forget when you’re trying to do imaginative work, in exactly the same way that you’ve got to forget about the imaginative work when you’re writing newspaper articles. Everything has the virtues of its defects and the defects of its virtues.”

Yet the skills that made him a good journalist are the same skills that have made him such a successful novelist. Just is an observer, with a keen understanding of the private lives of public people. He places them in familiar locations like Washington, D.C., and Chicago where his nuances and insight of the cities and their affect on the characters have earned him comparisons to Fitzgerald and Hemingway. And despite the fact that his first eight novels all took place in our nation’s capital, he doesn’t consider himself a “Washington novelist.” He notes that he always looks to Washington, “as a place and not a plot.”

Today, Just lives in Martha’s Vineyard where he’s working on his eighteenth novel, and tries to get back to Paris, his “most productive” setting, as much as possible. He lived there from 1986-1992, and he says it’s the place that most inspires him.

“If you’re doing imaginative work, like painting or writing, [Paris] just aides your concentration in a way I’ve been trying to figure out for some time,” he says. “I’m not sure why, but when I do figure it out, I’ll write about it.”
Back