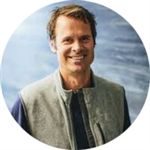 Tim Westergren attacked one of those big audacious goals when he launched the Music Genome Project® more than a decade ago, a project that would later power the personalization behind Pandora® internet radio, the leading personalized radio service.

By creating algorithms that would help predict what music people would like based on their previous choices, Westergren set the stage for the type of digital personalization transforming media today.

“I’ve worn many hats as a musician – composing, performing, engineering, producing – and each in some way inspired the idea for Pandora,” Westergren says. “The transition was very organic and natural. I had the idea, which grew on me over time. I shared it with a friend who was very enthusiastic. We wrote a business plan, and in a matter of months, raised some seed capital and rented our first office space. Before we knew it, we had hired a dozen employees and were off to the races.”

Like so many great ideas, Pandora fills a very basic need and it does it well. “I think we solve a big problem – helping people enjoy music they know and discover music they love – with a very simple solution,” Westergren says.

For Westergren, who worked for many years as a producer in the music industry, Pandora has provided a new, creative angle with which to view that artistic sphere. “It has been an extraordinary decade for the music industry,” he says. “It has gone through, and continues to go through, an extended period of creative destruction. It’s a very exciting time to be involved.”

One of the keys to success in the digital age is to take chances, something Cranbrook helped him learn. “I was a boarding student, so Cranbrook really taught me independence and self-sufficiency at a relatively young age,” Westergren says. “I learned to make decisions on my own.” For others looking to pursue their own entrepreneurial interests, he adds, “Give it a shot. You only live life once and you never know how far you can take something. There are few things more fulfilling than seeing your own original idea brought to life.”
Back