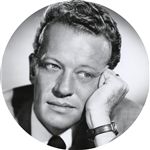 Class of 1932
Film and Television
Actor, best known for Perry Mason
from IMDB:
William Talman is best known for his role as Hamilton Burger, the district attorney who perpetually lost to Perry Mason in the long-running series Perry Mason (1957). Talman was an accomplished screenwriter and stage and screen actor, and appeared in numerous roles on television as a character actor from the mid-'50s until his death from lung cancer in August of 1968.

He was born William Whitney Talman Jr. on February 4, 1915, in Detroit, Michigan, the first son of William Talman Sr. and Ada B. Talman. His father was vice-president of an electrical company that manufactured industrial heat-measuring recording devices and yachts. During an interview with "TV Guide" in April of 1963, Talman told writer Richard Gehman that his father made a good deal of money, "enough to send me to school in a limousine each day. Public school. That meant I had to fight my way in and out." In school Talman developed an avid interest in athletics, especially boxing and baseball. He furthered his interest in boxing early in life by fighting on the local parish boxing team of the Episcopal Church. At one point in his life he played semi-professional baseball. He was educated at Cranbrook School and later attended Dartmouth College, where his interest in acting first took hold. He left Dartmouth in his sophomore year after an incident in which a freshman he knew "loaned" him a car so that he could go visit a girlfriend at Smith College. A bus forced the car off of the road and it hit a tree. A boy who was with them was killed and it later turned out that the car was stolen. Talman was asked to resign from Dartmouth, which he did. Although invited back the next year, he never returned.

Talman began his acting career on Broadway in the early 1940s. His first roles were in "Beverly Hills", "Yokel Boy" and "Of Mice and Men." He was appearing in "Spring Again" at Henry Miller's Theatre in January of 1942 when he received his draft notice for induction into the US army. Prior to leaving for active duty he married actress Lynne Carter. He entered the army as a private and saw 30 months of service in the Pacific, where he won a commission and eventually was promoted to the rank of major. During the war his assignments included the managing of a school that trained soldiers to put on shows. At one point he was in charge of training boxing and baseball teams. He was proud of the fact that his teams won both the boxing and baseball championships of the Western Pacific. Talman returned to Broadway after the war. Two of his more notable postwar roles were in Joseph M. Hyman's and Bernard Hart's production of "Dear Ruth" in 1946 and Henry Adrian's production of "A Young Man's Fancy" in 1947. In 1949 the actor moved to Hollywood and began making films. His first picture was Red, Hot and Blue (1949), in which he played gangster Bunny Harris. Other movie and television roles soon followed. In 1951 his wife sued him for divorce, citing extreme cruelty. She claimed that Talman had criticized her publicly in front of their friends. The divorce was granted in September of 1952 with custody of the couple's three-year-old daughter, Lynda, and 24% of Talman's income awarded to his former spouse. He went on to perform in over 17 films, several of which he starred in. Some of his more notable films include The Racket (1951), Armored Car Robbery (1950), Smoke Signal (1955), Big House, U.S.A. (1955), One Minute to Zero(1952) and Two-Gun Lady (1955). His best known role was as escaped killer and kidnapper Emmett Myers in the classic film noir The Hitch-Hiker (1953), directed by Ida Lupino. He also co-wrote two feature films, I've Lived Before (1956) and Joe Dakota(1957).

Talman married actress Barbara Read in 1952. The couple had two children, Barbie and Billy, but they separated in September of 1959. In a tragic turn of events, his former wife took her own life in December of 1963 by closing up her house and turning on the gas jets. Notes she left behind blamed ill health for her action. In March of 1960 Talman made headlines when he was arrested during a police raid of an alleged "wild nude party" being held at the home of an acquaintance, Richard Reibold. The incident caused CBS to invoke a morals clause in his contract that cost him his job on "Perry Mason." The charges were eventually dropped after a trial that was closely followed by the newspapers and sensationalized by the tabloids. Talman always maintained his innocence, and following the trial the judge in the case criticized the police for arresting him. He remained off the show until December of 1960, when CBS reinstated him after a flood of fan mail from supporters. He married Margaret (Peggy) Flanigan and adopted her two children from a previous marriage, Steve and Debbie. After the "Perry Mason" show ended in 1966, Talman went on a six-week tour of Vietnam to entertain the troops. Upon his return home, it was discovered that he had lung cancer. His last film was The Ballad of Josie(1967), with Doris Day.

Near the end of his life, Talman did something that, while common nowadays, was an extraordinarily courageous thing for an actor to do at that time. A heavy smoker for most of his life, he was angered by a newspaper article he read about actors being afraid to make anti-smoking messages for fear of losing opportunities to make lucrative cigarette commercials. He decided to do something about it. Talman volunteered to make a short film for the American Cancer Society, part of which was shown in late 1968 and 1969 as a television anti-smoking commercial. He was the first actor to ever make such a commercial. When the message was being filmed, Talman knew he was dying, was in a great deal of pain and was in fact under heavy sedation for it. The short film begins, "Before I die I want to do what I can to leave a world free of cancer for my six children..."

William Talman died of cardiac arrest due to complications from lung cancer at West Valley Community Hospital in Encino, California, on August 30, 1968, at the age of 53. Although his life was short, he left an enduring legacy through his writing, his acting, his heroism and his never-ending championing of the underdog.
Back