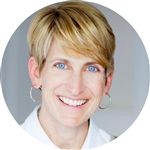 Class of 1982
Non-profit
Co-founder, Detroit Creativity Project
Beth Hagenlocker '82 had established a successful veterinary practice in California and her husband, actor Marc Evan Jackson, was quickly becoming a familiar face on screens large and small when concerns about budget cuts to arts education in Detroit schools led her to dedicate herself to bring arts education to middle and high school students in the city.

It was a path that had nearly nine lives for Hagenlocker. After Kingswood, Hagenlocker attended Brown University where she studied math and economics, and went on to get a Master’s degree in urban planning at the University of Michigan. She worked in community and economic development in Phoenix, Seattle, and Detroit before earning her veterinary degree at Michigan State. Hagenlocker was based in Royal Oak and specializing in feline medicine when she met her future husband, Marc Evan Jackson, an actor with Buffalo roots who got his start in comedy at Detroit’s Second City. Jackson is well known for his roles in “Brooklyn Nine-Nine,” “Parks and Recreation,” and the recent “Kong: Skull Island.” Their mutual passion for the arts and desire to contribute to Detroit's renaissance led them to start The Detroit Creativity Project (DCP) with several other LA-based performers with ties to Detroit. The nonprofit offers free improvisational training to underserved students in Detroit through a program called The Improv Project. Since 2012 the program has taught over 2000 middle and high school student show to improvise.

Hagenlocker says that the arts have been important to her since her Kingswood days. “I was inspired by Lynn Hardee and the weaving studio. I’ve had a loom since I was 14,” she said. “Every place I’ve lived I have done something in the arts. I’d say for me, the importance is the creative outlet and the chance to express your ideas and share something you’ve created with other people.” She notes that improv gives students an outlet for artistic expression and helps them build communication and teamwork skills. Recently Hagenlocker sold her veterinary practice so she could devote her time to growing The Detroit Creativity Project, dividing her time between Detroit and Los Angeles. “My parents and sister (Karen Hagenlocker, '81) still live near Cranbrook,” says Hagenlocker, “So I come back often.” Annual fundraising events in Detroit for the DCP have benefitted from the talents of Jackson, as well as Detroit ex-pats and fellow comedy stars Keegan-Michael Key and Saturday Night Live alumnus Tim Meadows.

“Since we started The Detroit Creativity Project, the thing that has inspired us most is the collaborative spirit in Detroit — the offering of ideas and support from other nonprofits and artists if they notice areas where we can evolve and expand,” says Hagenlocker. “There’s an enormous opportunity to become part of the conversation about what’s happening in Detroit.” Looking ahead, Hagenlocker said new partnerships with Living Arts and Marygrove College are in the works this summer. The DCP is also piloting a new course based on a two-year project with the University of Michigan. Students will have a chance to apply improv to issues like peer pressure and bullying. “Learning to improvise can be transformative for kids," she said. "Our goal is to reach as many students as we can."
Back