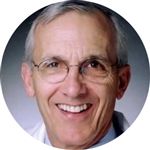 Class of 1955
Medicine
Inventor of the "e-knee" prosthesis

In a graduating class made up of two Rhodes scholars and a Heisman Trophy winner, Clifford Colwell thinks he’s hardly a Cranbrook class of 1955 standout. Those in the field of orthopedics would likely disagree.

In 2004, Colwell made history by developing and implanting the first electronic knee prosthesis.

Known as an “e-knee,” the prosthesis contains a computer chip that measures forces inside the knee while the patient walks, climbs stairs, and exercises. Researchers then use the data to develop better knee implants and rehabilitation plans.

Colwell is currently the medical director of the Shiley Center for Orthopaedic Research and Education at Scripps Clinic in La Jolla, Calif.

Colwell credits Cranbrook with his success. “Cranbrook was absolutely instrumental in helping me get where I am today,” he says.

For him, it was the people that shaped his experience. He credits mentors such as Bill Stapp, Bob Hoffman, Ben Snyder, and Rev. Young with taking him under their wing and “making me special.” That’s what he tries to do now as a professor at the University of California, San Diego School of Medicine and adjunct clinical professor at The Scripps Research Institute.
“We try to take young people and inspire them,” he says. “And hopefully one day they’ll say, ‘that guy made a difference in my life.’”
Back