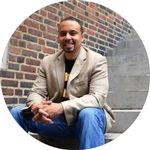 Class of 1992
Business
Senior Program Administrator of the Blackstone LaunchPad

Agee makes helping others his life’s work. Under his guidance, nearly 370 students have created their own business models with more than 115 businesses launched successfully.

Helping others and solving problems have long been dual priorities for Aubrey Agee II. As senior program administrator for Wayne State University’s Blackstone LaunchPad project, Agee has helped more than 4,000 people explore entrepreneurship and their potential for making the leap into a new enterprise.

“Today I help folks who don’t always have all the resources,” Agee says. “I help people who don’t fit the particular image of someone starting a business.” That includes Wayne State students and alumni ranging in age from young people just starting out to older adults who want to put their life’s experiences to good use.

That desire to help others grew when he came to Cranbrook as a HUB student in the 10th grade. “Cranbrook made me aware of a lot of things inside and outside the classroom,” he says. Because of the opportunities he had at Cranbrook, he says, “I felt obligated to use this opportunity to make an impact on the world.”

He no doubt inherited that desire to help others from his father, one of the first black architects in Michigan. Agee grew up in his father’s office, learning how to draft as a child. His father was known for his kindness toward others, often meeting people on the street, hiring them for his firm and providing life-changing training in everything from carpentry and construction to facility management and architecture.

“I learned how to take ideas and turn them into realities,” Agee says. “It’s what I saw growing up.” At Cranbrook, that drive manifested itself into a desire to tackle global problems on a local scale. “I wanted to get involved with student organizations like 4A (the African American Awareness Association) and Amnesty International. I wanted to solve issues now.”

Agee graduated from Wayne State University, earning his bachelor’s degree in mechanical engineering and his master’s degree in business. After working for General Motors for 10 years, he launched his own start-up, V-Power, specializing in vibration energy harvesting devices. Subsequently, Agee took over the operation of a GE wind farm in the Michigan thumb area.

Taken together, these experiences made him the ideal candidate to oversee Wayne State’s Launchpad project. It did not take him long to say yes when one of his former professors called and asked if he would be interested in the position. The greatest reward of his role, says Agee, is seeing people “get excited about possibilities go with their ideas. They have the confidence and are bold enough to take steps. And they now know that even if they failed, it was worth the effort and they’ve got what it takes to make something happen.”
Back