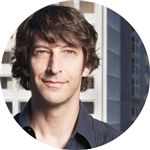 Growing in step alongside the digital boom helped Jay Adelson, ‘88, take the reins of the internet when the rest of us were still wondering how to plug in a modem.

Kids growing up in the 1970s and ‘80s straddled the chronological divide between life before and after the proliferation of desktop computing. It was possible to learn alongside the technology, keeping pace with an industry that had not yet adapted its lightning pace. Growing in step alongside the digital boom helped Jay Adelson, ‘88, take the reins of the internet when the rest of us were still wondering how to plug in a modem.
Graduating from Boston University with a degree in filmmaking, Adelson arrived in California after earning an unpaid internship with Skywalker Sound. Needing to earn cash to support himself, he fell back on his college minor in computer science and began doing tech temp work. “A friend was helping start the very first commercial IP (internet provider) in the U.S.,” says Adelson. “It was the first time you could dial into the internet. He said he’d pay me a salary and benefits and I was like, ‘What are benefits?’”

Today, Adelson’s resume reads like a hit parade of internet history. He was part of the creation of the first commercial web browser. Called Netcruiser, it predated the arrival of the ubiquitous Netscape. Adelson built the back-end of the internet, creating an infrastructure that would allow the average computer user to access the rapidly growing global web. “I was learning at the pace the internet was evolving,” Adelson says. “It was the frontier days of the internet when there were literally thousands of internet service companies.”

As the internet grew, so too did the need for an infrastructure that would allow for that growth without disabling the entire system. “There was a horrible problem with the ‘inter’ part of ‘internet,’” he says. “There were many thousands of networks like spider webs controlled by single companies like AOL and Verizon. Someone using AOL needed to be able to send an e-mail to Verizon.” Adelson’s job was to make it possible for these networks to communicate with each other. He helped design an actual physical space – a hub – where these networks could connect.

Known as the Palo Alto Internet Exchange, the physical plant where these networks met helped solve the problem for California firms. Adelson founded Equinix to solve that problem on an international scale and today, the company handles more than 70 percent of the world’s internet traffic. In short, if Equinix ever stops working, so does the internet. Governments , Fortune 500 companies and billions of global users quickly came to rely upon Equinix, leading to the creation of almost “Mission: Impossible”-like security scenarios to protect the technology and infrastructure that keeps the data flowing. In 2003, Adelson appeared for the first time before Congress, testifying on cyber security.

The experience with Equinix, says Adelson, was “very time consuming, stressful and scary.” Deciding to take an extended sabbatical, he and his family moved to upstate New York, only to be lured back to the West Coast when his close friend, Kevin Rose, approached him with an idea that became Digg, one of the world’s first social news websites. “With Digg, we wanted to crowd source and democratize news,” Adelson says. “In 2005, there was no Twitter, no YouTube, no sense of what crowd sourcing would be. It allowed the crowd to decide what was important and what wasn’t.”

Today, Adelson serves as CEO of SimpleGEO, a firm that taps into the ever-expanding realm of mobile communications and helps developers use location awareness to create new applications.

Dubbed one of the Top 100 Most Influential People in the World by TIME Magazine in 2008, Adelson fuels his success by getting over his passion for problem solving. Fifty percent of his inspiration, he says, “comes out of frustration, of sitting there and looking at a series of problems, how you could interact with your world.” The key is never to talk yourself out of trying something new. “People are scared of change and failure. Why not try things? Get used to taking risks and attack big, hairy audacious goals.”
Back