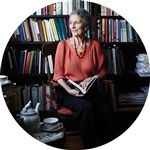 Class of 1945
Humanities
Author/Historian
President of the American Historical Association
Natalie Zemon Davis has always been captivated by the possibilities of social transformation. It began during her days at Kingswood, when her studies in history, literature, current events and ethics began to shape her world view.

"I feel I developed a social conscience at Kingswood,” says Davis.

She has become one of the world’s most prominent historians. She has written nine books, including the popular “The Return of Martin Guerre,” edited many others and contributed more than 80 journal articles to publications around the world. It has been said that she is one of today’s most creative historians, using her unique combination of imagination and painstaking research to tell the story of the human experience throughout history through the eyes of the ordinary person, not the elite.

"At Kingswood, I was already interested in people who were different, people who were not at the center of wealth and power,” she says. She was one of only a few Jewish students in the school at the time, and she feels the experience helped strengthen her character.

"I liked the sense of being a little different from the others,” she says. An active member of student council, Davis served as her class president at Kingswood and says the tension between being different and being committed helped her look at wealth and power with a critical eye. “That helped me have empathy for people who were poor or outsiders.” And considering her field of study has been primarily 16th-19th century France, she says lightheartedly, “that was the majority of the population.”

Her leadership role at Kingswood helped prepare her for her future role as the president of the American Historical Association in 1987, the second woman in the organization’s history to hold the position.

The importance of her work has been recognized by scholars around the world. In 2010, she was awarded the prestigious Holberg International Memorial Prize in Norway, awarded annually by the Board of the Ludvig Holberg Memorial Fund for outstanding scholarly work in the academic fields of the arts and humanities, social sciences, law and theology. She was also made a Companion of the Order of Canada in June of 2012, the highest class within the order.

She has received many honorary degrees over the course of her career, yet her degree from the Sorbonne in Paris touched her the most. “I studied scholars who went to the University of Paris in the 16th century, and to receive an honorary degree from the university which had been so important in my historian’s imagination was very, very moving,” says Davis. She received the Aby Warburg prize in 2001, an award given to an international scholar in the humanities. The prize is given in Homburg, Germany, in the house that the Warburg banking family had to flee during WWII due to the Nazi insurgence. Davis had been in Homburg in the 1990s to conduct research for her book, “Women on the Margins,” which features a Jewish character. As a Jewish woman herself, Davis says, “to be invited back to that town and receive that degree in a place from which the Jews had once been banished and expelled, was very special.”

She is currently at work on one of her most ambitious projects yet, a book currently titled “Braided Histories.” In it, she traces four generations of a slave family in 18th century Suriname, starting with the African generation. “In some ways, it’s the most difficult book I’ve ever done,” she says. “When I was writing about Martin Guerre, even though he wasn’t literate, there were a lot of documents I could use. Now, I’m working with only plantation inventories, but I’m trying to get into the mentality of these people.” Many of the slave women had European lovers, and Davis is interested in the braiding of the European and African cultures, and how their stories connect. She hopes to have the book finished next year.
“History has a way of speaking deeply about the past. And while the historian should always be faithful to the past, there are all sorts of ways it speaks to the present,” she says. “I always end up learning more about my own time. You get ideas about the present while reading about the past.”
Back