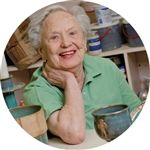 For more than eight decades, June Daisley Lockhart, ’38, has been making art and has no intention of slowing down. Much of her early training took place at Cranbrook while portions of the original campus were still being planned and constructed, at a time when some of the world’s greatest artists were making their own indelible mark.

“Our Kingswood class took a field trip to see (sculptor) Carl Milles at work and he was working on the Orpheus figure for the sculpture in Stockholm,” Lockhart says. “I immediately fell in love with his work and with sculpture.”

Her sculpture teacher at Kingswood was the legendary Marshall Fredericks, who would go on to create the iconic Spirit of Detroit sculpture in downtown Detroit. “He recognized my interest and determination and even arranged for me to go to the Art Academy and work in the sculpture classes there,” Lockhart says.

Later, as a senior at Kingswood, Lockhart wrote her thesis on the work of Milles. “I showed it to him and he asked for a copy,” she says. “When I gave it to him, he gave me the maquette of Jonah and the Whale.” That model is now outside the Kingswood Library while her thesis resides in the Cranbrook Academy of Art library.

After graduation, Lockhart continued studying sculpture during the summer months at the Art Academy. She also has studied sculpture at the Chautauqua Institute in New York, Penland School of Crafts in North Carolina, and Haystack Mountain School of Crafts in Maine. As creative and beautiful as her work is, Lockhart also finds joy in the logical side of its construction. “Before I went to Kingswood, I always like to make things, but it was the problem solving, not the beauty, that intrigued me.”
Her inspiration often comes from a specific need or request. “Ashland College in Ohio needed an eagle for the front of their performing arts building and I was asked to make it,” she says. “Recently, my church decided to have a pet cemetery so I made a figure of St. Francis. Or I can get an idea I think would be fun or nice and go for it. I enjoy the mechanics of sculpture as much as the beauty. I love shapes in spaces.”
Over the course of her career, she also has made time to help others find their artistic path. “I have been teaching others to do pottery and sculpture for at least 50 years,” Lockhart says.

In addition to more traditional materials, Lockhart also has been working with paper. “Paper sculpture intrigues me,” she says. “Once I learned how to make anything out of a flat piece of paper, I have made everything from little card creatures to a replica of the Statue of Liberty 26 feet tall. It is disposable art, but it gives a lot of pleasure along the way.”

The power of Lockhart’s work has been felt well beyond the joy it gives those who see it. Two years ago, she earned first prize in an exhibition entitled “Ageless Creativity: The Artists of Shell Point,” presented by Shell Point Retirement Community and the Sidney & Berne Davis Art Center in Fort Myers, Florida. “The whole experience of the competition was a memorable one. I received a check, a trophy, and blue ribbon. I have felt good about myself ever since. It was a great thrill. There were 200 pieces in the show from 49 artists and they were all good. I will never forget that day.”

Her work and the exhibition inspired a gift to Shell Point to create an on-site art center in which she and other artists can work. “The ground breaking has taken place and I ought to be able to throw a pot there on my 100th birthday,” she says.
Her art has been a constant companion throughout her life, which has included two “great marriages and three fine sons,” she says. About her work, she says with characteristic modesty, “I have pretty much cluttered up the world, but I can still make people smile at my age and that is a wonderful gift.”

This June, Lockhart will return to campus for her 80th reunion, accompanied by her granddaughter, who is also an artist. “It is pretty special to be the oldest living graduate of such a wonderful school,” Lockhart says. “My first year there was the second year for the school. I would not be who I am without that beginning.”
Back