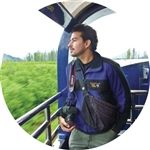 Class of 1998
Photography
Pulitzer Center on Crisis Reporting, founder Ground Media
Photographer David Rochkind has spent years viewing the world from behind his camera. Yet instead of passively cataloging the images he has seen, he has used the power of his images to affect social change.

After graduating from the University of Michigan with a degree in Sociology in 2002, Rochkind traveled to Venezuela, hoping to find work as a freelance photographer covering the national oil strike. Rochkind had studied abroad in Latin America in college, so he felt an affinity for the area, and made his home in Venezuela for five years.

When he felt, “I had told the stories I wanted to tell in Venezuela,” he moved to Mexico City and began the first of many ambitious projects highlighting human struggles in extreme conditions. After being named one of Photo District News’ “30 New and Emerging Photographers to Watch” in 2008, Rochkind began using the power of his lens to shine a light on Mexico’s growing drug war.

"When I got to Mexico, I realized the scope and consequences of the drug war,” he says. “And I thought it was a project that needed much more space than a typical newspaper or magazine article could provide."

So he began work on his book, “Heavy Hand, Sunken Spirit” (Dewi Lewis Publishing, October 2012), a project that took him inside the emerging “narco-culture” and accompanying violence and fear that is changing a nation. It took three years to produce, and shows how Rochkind is drawn to extreme crisis that become almost routine to the communities they touch. He received his first Pulitzer Center on Crisis Reporting grant while in Mexico for his work covering human smuggling.

Rochkind then turned his attention to global health and through an “International Reporting Project” fellowship from Johns Hopkins University, began work covering the tuberculosis epidemic in South African gold mines. The problem was so widespread; he received additional support from the World Health Organization to travel to Mumbai, India, to cover the problem in urban settings and another grant from the Pulitzer Center on Crisis Reporting to cover drug-resistant strains of TB in Moldova.

"Much like the Mexico project, I thought the issue of TB was so broad and complex that it deserved more space, and people needed more time and more tools to understand what was happening,” says Rochkind.

Working with the Pulitzer Center on Crisis Reporting and the Lilly MDR-TB Partnership, he created a free online education program at www.tbepidemic.org, documenting the challenges to communities and possible solutions. It offers downloadable lesson plans for teachers and shows how students can become active in the fight against this disease.

Rochkind is recently worked in Haiti on a project about faith and spirituality and another about the culture of the Haitian countryside and the role agriculture plays in Haiti’s development. He recently received his third grant from the Pulitzer Center on Crisis Reporting that has him traveling to Honduras to document the way the Garifuna population is using their unique customs and traditions to combat the dramatic increase in HIV in their community.
Rochkind hopes all of his work can be used by nongovernmental health organizations.

He is the founder and Creative Director at Ground Media.

"As outsiders, we look at these issues and they seem extraordinarily dramatic – outliers,” he says. “But when you are in the communities where these things are happening, like the conflict in Mexico or TB in India, they are just things people have incorporated into their daily lives. I think that really shines a light on how serious this issue is that it becomes so ingrained as to become customary to those who are living it.”

Rochkind credits Cranbrook’s creative atmosphere with helping to give him his start. “The only photography class I’ve ever taken was at Cranbrook,” he says.
Rochkind’s work has been featured in The New York Times Magazine, Time, Newsweek, Stern, Rolling Stone, Le Monde Magazine and many other publications. See all of David’s work at www.davidrochkind.com and ground.media.
Back