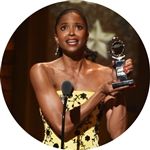 Class of 1989
Theater
Tony Award Best Actress for Hamilton (orig. cast)
It is not often that a New York Times theatre critic suggests to his readers that they “mortgage their houses and lease their children” to secure tickets to a Broadway show, but that is just the kind of year it has been for the game-changing hit musical, “Hamilton” and one of its stars, Renee Elise Goldsberry, CK’89.

A veteran of some of the biggest musicals in recent memory, including “Rent” and “The Lion King,” Goldsberry says she knew “Hamilton” was special from the moment she heard writer Lin-Manuel Miranda’s demo of “Satisfied,” one the show’s signature numbers. “My brain exploded because I thought it was brilliant,” she says. “I knew it was the mother lode of why you say you want to be part of the theatre. I’ve been having the best time ever on Broadway, introducing this work of art to the world.”

Over the last year, Goldsberry has earned a Drama Desk Award for Outstanding Featured Actress in a Musical, recognizing her work as Angelica Schuyler, the sister-in-law of Alexander Hamilton in this hip-hop-fueled account of the Founding Father’s life.

Goldsberry grew up in Houston, Texas, and was involved in theatre from a young age. That interest continued to develop when she came to Cranbrook as a boarder and joined Madrigals under the guidance of Nina Machus and Fred Bellinger. She flexed her dancing skills in Jessie Sinclair’s classes and soon found herself on stage, directed by Dr. Charles Geroux.
“They were all very dear to my heart and influential,” Goldsberry says. “Cranbrook was such a great place to grow up. It was a wonderful liberal arts education and was instrumental in who I am today. I have just a million memories and remember my time in every corner of that vast campus.”

Upon graduation from Cranbrook, Goldsberry went on to earn her bachelor’s degree in theater from Carnegie Mellon University and a master’s degree in vocal jazz performance from the University of Southern California. And she has worked steadily ever since, including an award-winning turn on the ABC soap opera “One Life to Live,” in New York City Shakespeare in the Park revivals, as attorney Geneva Pine in “The Good Wife” and the list goes on.

Her work in “Hamilton” has placed her in the midst of a true cultural phenomenon, one that most recently led to performances at the Grammy Awards and at the White House, where she and her cast mates sang for President Barack Obama and the First Family.

To today’s Cranbrook students striving to find their places on the stage or screen, Goldsberry encourages them to showcase their talents by telling their own stories and making their own art. She recalls the time and expense that went into creating her first demo, recorded with the help of a Cranbrook classmate. In today’s digital age, “those constraints don’t exist anymore. Tell your own stories. A lot of it is trial and error but it will pay off. Don’t wait to be brilliant.”
Back