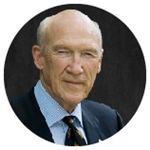 From 1979 to 1997, Alan Simpson served as a United States Senator from Wyoming. He was a conservative and an opponent of government regulation, as well as an outspoken advocate for access to abortion, gay and lesbian rights, and equality for all persons regardless of race, color, creed, gender, or sexual orientation. He was Republican whip from 1985 to 1995 and chairman of the Veterans' Affairs Committee from 1981 to 1987 and from 1995 to 1997. During his tenure, Simpson also chaired the Immigration and Refugee Subcommittee of Judiciary, the Nuclear Regulation Subcommittee, the Social Security Subcommittee and the Committee on Aging.

After his retirement from politics, Simpson taught at Harvard University's John F. Kennedy School of Government, serving two years as Director of the Institute of Politics. In 2000, he returned to Wyoming to practice law with his two sons, William and Colin. Colin Simpson is a Republican member of the Wyoming House of Representatives. Alan Simpson occasionally teaches at his alma mater, the University of Wyoming, and serves as co-chair of Americans for Campaign Reform.

He recently gave a very moving eulogy for President George H. W. Bush, which can be seen here.
Back