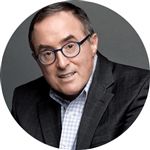 Class of 1968
Journalism
Journalist/Commentator
Founder of Slate, former editor at the Los Angeles Times
Michael Kinsley is an American political journalist and commentator. After graduation, Kinsley went on to Harvard, where he served as vice president of the university's daily newspaper, The Harvard Crimson. He was awarded a Rhodes Scholarship and studied at Magdalen College, Oxford, then returned to Harvard for law school. While still a third-year law student, Kinsley began working at The New Republic with fellow Cranbrook alum, Jeffrey Dearth.
Kinsley's first exposure to a national television audience was as moderator of William Buckley's Firing Line. In 1979, he became editor of The New Republic and wrote the magazine's TRB column for most of the 1980s and 1990s. That column was reprinted in a variety of newspaper op-ed pages, including the Washington Post, and made Kinsley's reputation as a leading political commentator.
From 1989 to 1995, Kinsley appeared on CNN's Crossfire, co-hosting with conservative Pat Buchanan. Representing the liberal position in the televised political debates, Kinsley combined a dry wit with nerdy demeanor and analytical skills.

After leaving Crossfire in 1995, Kinsley returned to his editorial roots, relocating to Seattle to become founding editor of Microsoft's online journal, Slate. In 1998 he was considered for the position of editor in chief of The New Yorker, but it was ultimately awarded to David Remnick. In 1999 he was named Editor of the Year by the Columbia Journalism Review for his work at Slate.
Back