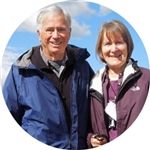 As a young Cranbrook graduate, Bruce McCaul faced a tough decision. Would he seek a career in physics or economics? A small satellite no larger than a beach ball helped guide his decision.

“We had to choose our majors shortly after Sputnik launched, and I decided more people should study physics than economics at that point,” he says.
After graduating from Yale University, McCaul continued his education in physics at Stanford University where he earned his master’s and doctoral degrees. At Stanford, he studied with future Nobel Prize winner Arthur Schawlow, the father of laser spectroscopy. It was Schawlow who first proposed the theory of the laser in 1958, two years before the first one was built.
Working in Schawlow’s lab, McCaul helped pursue potential applications for laser technology, including one without which many people today would be lost. “One of the first experiments Professor Schawlow did was on how to remove tattoos,” McCaul says. “We would tattoo pigs and use lasers to remove the tattoos. Now today that’s a massive business.”
With an MBA from Harvard Business School, McCaul was well equipped to launch his own business efforts in laser technology. Starting in 1970, he served as chief executive officer of Molectron Corporation for 13 years, developing laser-based technologies for medical use.
Today, McCaul is president of Oxigraf, Inc., a global leader in the manufacturing of laser-based oxygen sensors for medical and aerospace applications. His company’s sensors help keep passenger jet fuel tanks safe and are defining new ways to measure oxygen for healthcare and cardiopulmonary exercise testing.
McCaul’s love of science began as a young man. “Living in Detroit, I think everyone was interested in technology,” he says. It was a passion that carried over to his days at Cranbrook, where he was a lifer. “They had a great science program that made everything interesting to us. We admired our teachers so much.”
When McCaul looks back on a career filled with technological firsts, he says it is the people he remembers most. “I think now of all the people who worked for me who went on to do great things,” he says. “It’s like being a professor. It’s very rewarding to see.”
Back